Truncus Arteriosus (TA) is an uncommon congenital cardiovascular anomaly that is characterized by a single arterial trunk arising from the normally formed ventricles by means of a single semilunar valve (ie, truncal valve). Comparison of a healthy heart with truncus arteriosus defect.

Causes
Most of the time, this defect occurs spontaneously. Genetic disorders, and teratogens (viruses, metabolic imbalance, and industrial or pharmacological agents) have been associated as possible causes. Up to 50% (varies in studies) of cases are associated with chromosome 22q11 deletions (DiGeorge Syndrome). The neural crest, specifically a population known as the cardiac neural crest, directly contributes to the aorticopulmonary septum.

Microablation of the cardiac neural crest in developing chick embryos and genetic anomalies affecting this population of cells in rodents results in persistent truncus arteriosus. Numerous perturbations affecting the cardiac neural crest have been associated with persistent truncus arteriosus, some of which include growth factors.

History
The disorder was first described by Wilson in 1798. Initial surgical management consisted of palliative pulmonary artery (PA) banding; however, long-term survival associated with this treatment was poor.

The first surgical repair was performed in 1962, when Behrendt and colleagues closed the ventricular septal defect and used a valve less conduit to establish continuity between the right ventricle (RV) and the PA.

In 1963, Herbert Sloan at the University of Michigan completed the first repair using a non valved conduit with long-term survival (not reported until 1974).

Improved prognosis for patients with truncus arteriosus resulted from various corrective operations by analysing the natural history of this condition while applying innovative ideas, improved technology, and perioperative care. Diagnosis
Truncus Arteriosus can be diagnosed through multiple screenings-

Treatment
Initial treatment begins with stabilizing the infant. Medications to control congestive heart failure such as diuretics are often begun. Surgical correction is typically carried out in the first few weeks of life after the infant is maximally stabilized.

The surgical repair of truncus arteriosus requires the use of heart-lung bypass machine support. 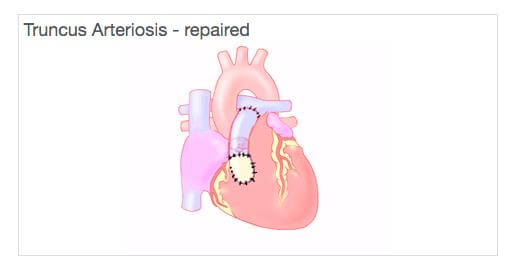 Most infants require a period of very close monitoring in the Cardiac Intensive Care Unit while their heart function recovers from the major reconstruction.

Time in hospital following surgery may vary from 1-3 weeks in most cases.

Over the years, Genesis Foundation which provides financial care for critically ill children has supported only a handful of children with Truncus Arteriosus. One such case is Baby of Channamma. Two months old, Baby of Channamma was born on 9th December 2019 to Channamma and Raja Kumar from Raichur, Karnataka. She is the first born child to the couple. A month after birth, her parents noticed that the baby had difficulty in breathing.

They consulted a doctor at a nearby district hospital where the baby was detected to have a murmur. Her saturation was low, and she had bluish discoloration of the lips. Doctors immediately suspected a Congenital Heart Defect. Parents were referred to Narayana Health in Bengaluru. The parents had never ventured out of their district. They borrowed some money from their friends and embarked on their journey to Bengaluru with their hearts full of anxiety.

The bus journey took around nine hours, which with a young and unwell baby is extremely testing. An echo was done and the diagnosis was Truncus Arteriosus, thus the oxygen content of the body was found low due to the mixing of pure and impure blood. The baby required open heart surgery. Parents were counselled for the same. They wanted some time, as they had to consult their seniors at home. They returned back home.

Raja Kumar is a labourer with a monthly income of Rs 833. The cost of surgery was beyond his means. The doctors assured support to the family and immediately reached out to the Genesis Foundation. With financial aid from Genesis Foundation, in partnership with Collective Good Foundation (Wipro GE), the child was operated on successfully and is in good health now.